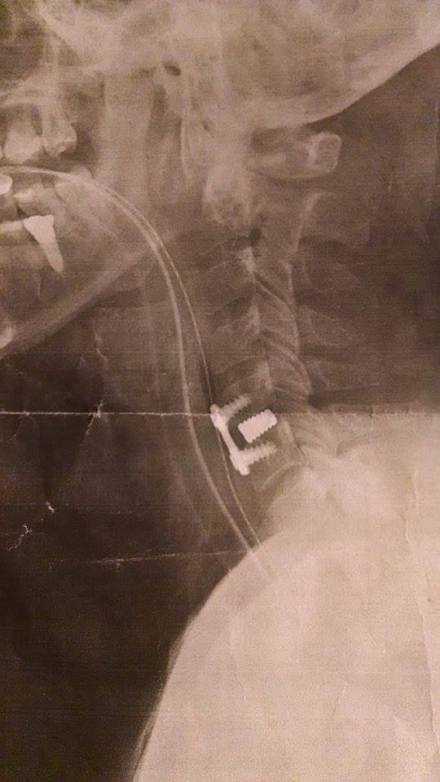 But I have a great excuse. Bear with me for a moment. I had neck surgery. Well, that only explains the last five months of inactivity. But the three months before that, I was dealing with some serious low back and neck issues which made running and being anything other than a sloth pretty difficult.  I think I averaged about 15 miles per week of running. That was pretty impressive, I know. 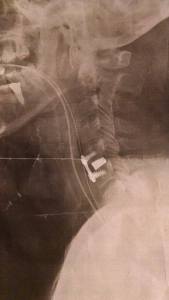 An anterior cervical discectomy and fusion at C5-6. They removed the C5-6 disc and replaced it with some screws, or something.

And this is what it looked like on the outside. 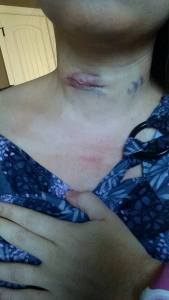 I’m sorry, I can’t help that I’m sexy. My mama came to help me recover, which was very nice of her, especially during almost tax season (she is a CPA). We spent two nights in a fancy hotel with Super Girl, and I watched tv, read trashy magazines, drank stuff through a straw, and Vicodin-texted people. It’s almost as fun as ambien texting. Almost. Super Girl told me I needed to go to lululemon to get a scarf to cover my neck hole, so of course, I did.

The next several weeks were tough. I wasn’t allowed to drive for two weeks, or lift more than a gallon of milk for 6 weeks, which meant I couldn’t pick up my own kids, including Super Baby. Which also means that Super Dad had to ramp up his super parenting skills exponentially, which you wouldn’t think possible, given that he already does everything around here. He would go and get Super Baby from her crib in the middle of the night and set her down beside me in the bed so I could nurse her. Then he would put her back in her crib. Sidebar: WHY did my third baby decide to be the one who was a crappy sleeper? Super Girl and Super Toddler slept through the night at like 7 days old. Not really, but within the first three months of life. Super Dad also had to take them to daycare and pick them up every day for a few weeks. I eventually got to the point where daycare would help me bring the kids out to the car so that I could at least pick them up at the end of the work day. I also couldn’t really be alone with Super Baby because if she needed to be picked up, I couldn’t exactly rely on Super Girl to do it. Although she is freakishly strong for a 5-year-old.

Do you guys know about parenting points? It’s where one parent accumulates points (to be cashed in at a later date) by doing things like watching all the kids for a weekend, or getting up with the baby in the middle of the night, or what have you. Well, Super Dad accumulated about 749,204,573 points during my recovery. He has cashed in approximately 3,200 of them during a recent trip to Colorado. So I am still seriously in the red.

Another awesome thing happened in the winter. We got a ton of ice and snow. About three weeks after surgery, I slipped and fell on the ice, which is not something you want to happen when you are recovering from a cervical fusion. I was starting to feel a lot better post-surgery. I had regained much of the strength in my left hand which I had lost, and my thumb and hand pain were almost gone. But after I fell, I began having this horrible nerve pain in my right shoulder. I know, I should play the lottery because I have the best luck ever! Well, guess what? To this day, I am still dealing with that pain. I managed to herniate the disc below where I had my fusion. Why? Because when you have a fusion, the levels below and above are at greater risk for herniation. So, yeah, that’s fun.

I am treating with my orthopedic surgeon and a pain management specialist, and have gotten two epidural steroid injections, several trigger point injections, and am going to start physical therapy. I do electric stim at home too. In the mean time, my running has been virtually nonexistent because the jostling seems to bother me. And I am seriously boo-hooing because I haven’t been able to go to Madabolic Raleigh since the new year (seriously, if you are in Raleigh, Charlotte, Charlottesville, Asheville, Greenville, or one of those other ‘villes, you NEED to go. They have an awesome program going and the owners of the Raleigh location are the sweetest people ever). But I have been going to Flywheel a lot because it is low impact and it totally feeds my competitive illness. If I’m not in first place at the end of a class, I feel like I just wasted $20. It’s the only thing I can win at these days, besides eBay and “how many times a day can you yell at your kids?” contests.

I am also turning around my diet with the 21 Day Sugar Detox, which is basically Paleo. I think, I’m not sure. I never really looked into Paleo before because I was 100% convinced I could never give up bread. As we all know from my blog name, I am super into carbs. Like, the bad kind. I am hoping that putting the kibosh on gobbling sweets and swigging Diet Pepsi will help with my pain and some other health issues I won’t get into here.  More on that in my next post, which I PROMISE will not be in 8 months. I am only on day 2 of the detox and so far it is going pretty well. If by “pretty well” you mean “in a way that makes me wish I could be in a medically induced coma for the next 20 days.”  No really, it isn’t nearly as bad as I thought it would be, minus the excruciating amount of time I have to spend prepping food and cooking. Which is (how many times can you divide zero into one hour?) times more than I typically spend on those things each day.

But first, I leave you with two delicious things:

1) The Banana Vanilla Bean N’oatmeal that I had for breakfast this morning. To die for.

2) This baby. Who needs to be eaten, immediately. Babies are Paleo, right?

In which I contemplate absurd moments in parenthood, occasionally attempt to refer to myself as a “triathlete” while keeping a straight face, and maybe post some random pictures of stuff I’m knitting

Recipe for the multisport lifestyle

Iron-Mamas's (for Iron Men too!)